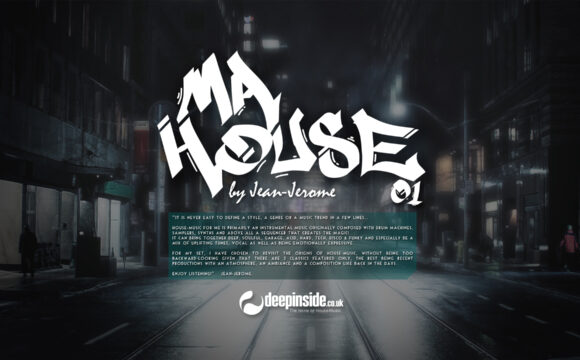 What is your definition of House-Music?

"It is never easy to define a style, a genre or a music trend in a few lines...

House-Music for me is primarily an instrumental music originally composed with drum machines, samplers, synths, and above all a sequencer that creates the magic!
It can bring together Deep, Soulful, Garage, Acid, Hard, Tech, Disco & Funky and especially be a mix of uplifting tunes, vocal as well as being emotionally expressive.

For my set, I have chosen to revisit the origins of House-Music, without being too backward-looking given that there are 2 classics featured only, the rest being recent productions with an atmosphere, an ambiance, and a composition like back in the days.

To all those who wonder how our beloved Jean-Jerôme got there, here the path of DJ who became the specialist in sunny morning and most evenings on Radio FG.
1992 was the starting point, "the first slap" (dixit Jean-Jerôme), immersion in a medium with electro trend, the discovery of his Detroit at parties "Cosmos Factory" to Mozinor (Montreuil/France). During this year, attendance of Jean-Jerôme to follow the techno scene is impeccable. He listens Radio FG on 94.4FM (Paris) at the time and spends his weekends in "Rave party".

During these years, Jean-Jerôme alongside many Djs who advise (Thank Dj Gregory!) for the equipment, techniques or labels which, over time, lead to more exchanges than good.
Jean-Jerôme then started mixing in the biggest clubs and bars in the French capital (REX, Hell, Queen, Gibus, What's up bar ...) and puts its name as a quick reference for "House music".
It continues and persists in this environment by finding her true calling: record production. He released his first EP Drum & Bass in 1997 under the pseudonym DJ DECAY and Hard-house remix with Sextoy (RIP) for the hymn of the Gay Pride that year. Arriving in 1998, he released a remix on a French label (Recall) as the Mellow D.

Compilations Radio assure him a beautiful and widely promoted among the public French (FG DANCEFLOOR FG 1.3 SUMMER 2003) and abroad through many licenses on prestigious labels. (Ibiza with KM 5, Thailand for Lucile, Switzerland with the compilation Street Parade, Mexico, Holland for Chemistry...)
He always wants more; in 2001 this is a new collaboration that was born with Cedric.C the "PURPLEHEADZ" will be born...
The first EPs are quick (ILLMATIC records, records with the hit MILKSHAKE RAMBLE) as well as CD compilations (MORNING
BEATS 1 AND 2 LOUNGE ASIAN, DANCEFLOOR FG 3 and POWER HOUSE for France and the LUCILE for Thailand).
This is a new stage begins...
The two stooges do not stop there; they test the joys mix of 5 decks in Thailand (LUCILE, DIABOLO, LUCIFER) then Singapore to finish on the best dancefloor Parisians (QUEEN, NEW CASINO, GIBUS, COUCH WORLD). Their collaboration ends in 2010.

In 2014, after a long break, will be the year of a beautiful meeting and especially a new collaboration with Julien aka Digitarmix. Together they start the ITSIC project, a clever mix of their respective influences.
In just 2 years the duo stands out by releasing 3 remixes for the labels Hydrogen Records, Iconyc and 3XA Music, then a n EP of 2 tracks for the excellent French label Pumpz Music.

In 2016, a new association was born with his longtime friend, Braddy ... THE SOULBROZERZ!
Inspired by the House of New York but also by the Techno sound of Detroit, they mix all these influences in their productions. The result is a fantastic EP on the legendary American label LENNY FONTANA, Karmic Power Records.
With the participation of the singer Mel'Hisse, "Oh Boy" will be released in the middle of this year the follow-up in 2017 of a new reference on the label of another legend of the House, STEVE "SILK" HURLEY, S & S Records with the title "Save Our Soul".