CIRCLE OF FUNK is on DEEPINSIDE 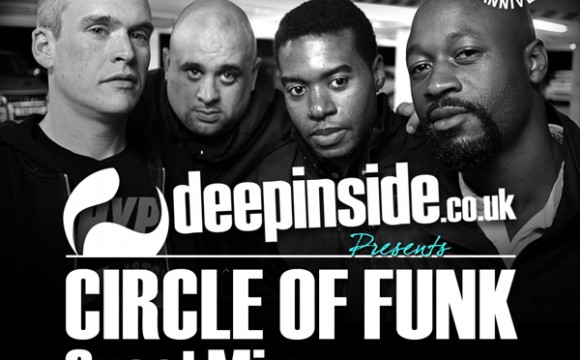 CIRCLE OF FUNK is on DEEPINSIDE

This week, CIRCLE OF FUNK has produced a fantastic session for all of us, enjoy beats and tracks from the likes of:

Circle of Funk have their roots firmly in Bristol, the music capital of the UK’s South West – all four members – Lee Robinson, Paul Stephenson, Andy Caulfield and Daniel Ankrah were born there.

Lee and Paul met at College in Bristol and started out in the music business as “The Cutz”, which soon became one of Bristol’s most prestigious underground Hip Hop shows, and resulted in them being featured as guests on Radio One’s Tim Westwood show.

In 1998 they formed a DJ duo called Culture Shock, their apt name reflecting the extraordinary, envelope-pushing music that they played. They made a name for themselves in and around the bars and clubs of South London, especially around the Brixton area. These haunts included the popular venues of the Bug Bar and Loughborough Junction, and at the end of the evening they would hand out CDs to the regular clientele. The CD’s were compilations of UK and US underground music including soulful house, rare groove and funk as well as exclusive promos from important record labels such as Swing City and Defected. The guys had also travelled to New York where they were given promos and music from some of the most prominent and cutting-edge DJs, and these mixes were also included on the CDs. The feedback was extremely positive and Culture Shock gained quite a following, however the name Culture Shock was in no way unique, and the boys needed a name that would make them instantly identifiable from the other DJs, producers and musicians on the scene.

In 2000, Lee’s school buddy, Andy Caulfield joined them and “Circle of Funk” was born. Andy was already an established DJ and Producer from the days of The Cutz, and his combination of musical tastes, refreshing attitude, and talent complemented the group perfectly. The trio were buzzing off the vibe, and compiled more mixed CDs to hand out at gigs. They were in demand for nights such as City Loud and Pushca and were soon given an opportunity by Bristol house music veteran Deli G (The Touch) to play in their home town. The guys were great fans of Deli and he became both a guru and an inspiration for Circle of Funk, helping them out with advice when needed. Deli is still in touch with Circle of Funk and continues to mentor and assist them to this day.

The group’s first international booking came in 2003 when they travelled to beautiful Croatia, full of excitement and not knowing what to expect. Croatia was new territory for UK DJs and a whole new experience for Circle of Funk. They spun at the capital of Zagreb, the coastal town of Zadar and a small village called Koprivnica, making many new friends on their travels, revelling in the vibe and soaking up the culture. Such was the impact of the initial visit, that the boys subsequently returned to Croatia a further three times, receiving a warm welcome each time.

In 2005 social media became a novel and good way of promoting themselves and Circle of Funk created a MySpace page to post their music. They received very good feedback globally, and it also allowed them to listen to a whole network of other musicians via the wonders of the internet, hence opening up a whole new window of opportunity for them. Circle of Funk felt that their music was improving enough to approach vocalists and they contacted Mandy Senior who was working with Basement Jaxx at the time. Mandy gave them the chance to remix her track “Games”, and this coincided with the boys’ decision to create their own label – “Slapped up Soul”.

In 2006 Slapped up Soul came to fruition with “Games” being the very first release. Circle of Funk distributed the single around as many of the London record shops as they could including the legendary vinyl joints: Uptown, Black Market, Know How records, Bar Vinyl and Vinyl Junkies. They soon realised that they couldn’t distribute the record as widely as they needed to, and their close friend Derek told them about a distribution company called One Nation. One Nation loved the track and took all of the copies to sell (except for a few which the group kept as souvenirs). This was the first and only time that Circle of Funk produced vinyl. The digital age was dominating the music scene and many DJs were ditching their vinyl in favour of new technology.

Lee became a MySpace addict, enthusiastically connecting with other musicians and producers worldwide. He formed a strong friendship with a young producer from Bristol called Daniel Ankrah a.k.a. Blackjack and introduced Blackjack’s music to the other members of the group. The boys met up with Daniel to work on a project initially, but everybody soon agreed that Daniel should become the fourth member of Circle of Funk, and so the trio became a quartet.

In 2007 Lee and Paul travelled to their first Winter Music Conference in Miami and networked with some of the DJs, producers and artists that had inspired them from afar. They used the opportunity to promote “Games” further, giving the vinyl to the people who they had been unable to reach before. It was in Miami that they met Tank Martinez who touched them with his words of wisdom, telling them to believe in themselves and giving them some new-found confidence. Sadly Tank Martinez has since passed away, but he lives on in Circle of Funk’s consciousness and a future release will be dedicated to his memory.

They returned to the UK motivated and inspired, and it wasn’t long before the next release was completed – The Janet Walsh EP which featured the tracks “In the City” and “M4 Movements”. This time the release was promoted digitally to various DJs and producers around the world, and the boys were delighted to receive their first positive feedback from the New York Legend DJ/Producer Jon Cutler.

In 2009 Circle of Funk were invited to play at the Winter Music Conference in Miami while promoting their fourth release on Slapped Up Soul – “Control Room”. It was very well received both in the US and the UK, and helped to enhance the label’s reputation further. The track grabbed the attention of Phil Asher, head of the Restless Soul label and production team, and a turning point came when Phil placed “M4 Movements” at the top of his “Ten ‘outta ten” UK chart in the February 2009 edition of DMC magazine.

Producing music is more than a hobby for the Circle of Funk boys – it is both a passion and a way of life, their unique talents being a gift from God. They are a group that like to surprise their audience by pushing the boundaries of dance music, and their diverse cultural heritage (the group have ancestors from Jamaica, West Africa, and Ghana as well as the UK) is reflected in the depth and richness of their deep soulful house grooves.

Their musical influences originated in the 80’s soul music scene with performers such as Michael Jackson, Chaka Khan, Adeva, Loose Ends and Kym Sims. Their inspiration grew with 90’s Old School hip hop where they became more immersed in the music around them and started to follow legendary producers including DJ Premier from Gang Starr, Pete Rock and CL Smooth, Kenny Dope, J Dilla, MF Doom, Mobb Deep, Heltah Skeltah, A Tribe Called Quest, Notorious BIG, EPMD, and Public Enemy. In fact the first LP that Lee bought was “It Takes a Nation of Millions to Hold us Back” by Public Enemy.

The boys enthusiastically absorbed as much knowledge as they could from their older peers such as Grant and Delge from Massive Attack, Tricky, Roni Size, Stanton Warriors, Deli G, Mike Shaw, DJ Lynx, and other extended family members, friends, and associates from Bristol’s vibrant musical landscape.

The boys have been invited to remix tracks by many artists including Louise Golbey, Rightside ft Ronnie Canada, Alliance DC ft Rachael Calladine, and MrBougx from South Africa which is due for release towards the end of 2013 and already receiving rave reviews.

They have also been delighted to feature remixes from “Flex” aka Paul Francombe who has known Dan from their schooldays. Flex’s remixes have featured on Circle of Funk’s releases of “On Fire”, “In Love” and most recently “Invisible” ft Robert Owens.

Robert Owens is a well-established artist, having featured on many great house tracks including Frankie Knuckles and Satoshi Tomiie’s classic hit “Tears”. The boys regard it a great honour and pleasure to have collaborated with such an inspiring and talented artist, and Robert has played a major role in reinforcing their belief in what they do.

They are also working with top male and female vocalists such as close friend Lifford Shillingford (who featured on Artful Dodger’s “Please Don’t Turn Me On” and “Something”), Natasha Watts (Purple Music, and Soul Survivors Best New Artist 2013), Dawn Tallman, Frances Mary and Charlene Samms.

Circle of Funk promise some exciting future releases including a collaboration with one of their idols – Mr V, as well as working with a variety of artists to produce different genres of music including Nu Soul, Downtempo and Electronica. There is always an element of surprise in their work which they hope will keep their music edgy and intriguing.

They recently teamed up with soulful house producers Wipe the Needle (Lee Gomez and Mikael Nybom). We can expect some dynamite project collaborations and remixes from this heavyweight force who will be not only producing deep house music, but also groundbreaking downtempo, nu soul sounds.

The fans can look forward to several international gigs planned with live singers, a label launch party for Slapped Up Soul and its artists, more free exclusive downloads of back-catalogue works and mixes, Circle of Funk merchandise, a brand new interactive website and a new radio show, all coming very soon.

Look out for much more to come, and a bright and bold future as Circle of Funk continue to move forward, bringing innovation, vibrancy and ingenuity to the dance music arena.