ANTONELLO FERRARI is on DEEPINSIDE #02 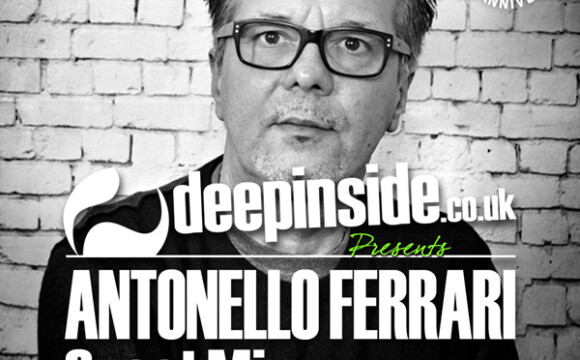 ANTONELLO FERRARI is on DEEPINSIDE #02

This week, our dear friend ANTONELLO FERRARI is back at DEEPINSIDE with an amazing mix which features some fresh tunes of its own and from the likes of:

Club: guest in the most important clubs in Italy and currently resident DJ of one night traveling in Italy '' Soul Heaven - The pleasure of the music '' with international dj guests and live musicians. Production / producer: his career began in 1992 with the publication of many projects on the most 'important Italian label (D-Vision, UMM).

In 1996 he produces with Boris Dlugosh 'You Gotta Move' which is published on Undiscovered in the UK and achieved great success.

On Zrecords is published the project with the collaboration of Joey Negro '' Make room for me '' with the remix of Micky More.

2014: founded the project with Michael Procter '' Get on out there '' on Mychan Records in collaboration with Dj Spen & Thomas Davis and Michele Chiavarini. In the same year is published on King Street Sounds project with Dawn Tallman '' Read between the lines '' with the participation of Richard Earnshaw.

2015: he started working with Aldo Bergamasco with the project '' Josephine '' voiced by Marc Evans and remixes by Eric Kupper, Opolopo and Terrence Parker. The same year the production with Aldo Bergamasco and La Shonda Reese with the song '' Watcha gonna do whit my lovin '' which is published on the label Purple Music.

Finally 2015 is published in the prestigious label Quantize Recordings song '' Tenderness '' with Samantha Johnson and the participation of the remix of Michele Chiavarini, Khan & John Earl Tutu with Dj Spen.